British actress and producer who played an aspiring actress in David Lynch’s psychological thriller Mulholland Drive, which was her breakthrough role and garnered her international recognition. Watts played journalist Rachel Keller in the horror remake The Ring, and reprised the role in its sequel The Ring Two. She has also starred in 21 Grams, The Impossible, I Heart Huckabees, Ned Kelly, Birdman, King Kong, Mother and Child, and Adore. Born Naomi Ellen Watts on September 28, 1968 in Shoreham, Kent, England, to parents Myfanwy Edwards and Peter Watts, her older brother Ben Watts is a photographer. In 2005, Watts began dating American actor Liev Schreiber. Their first son, Alexander “Sasha” Pete, was born in July 2007 in Los Angeles, and their second son, Samuel “Sammy” Kai, in December 2008. However, they broke up in 2016. In 2017, Watts began dating American actor Billy Crudup. 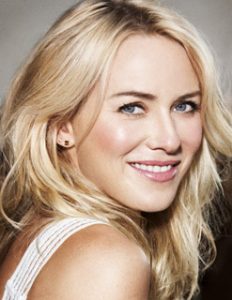 Naomi Watts Facts:
*She was born on September 28, 1968 in Shoreham, Kent, England, UK.
*She was four years old when her parents divorced.
*She began her acting career appearing in TV commercials in the mid-80s.
*She made her debut in the 1986 Australian film For Love Alone.
*She received Academy Award nominations for her performances in 21 Grams and The Impossible.
*Her favorite actresses are Meryl Streep, Julianne Moore and Jodie Foster.
*She is good friends with Sean Penn, Mark Ruffalo and his wife Sunrise Coigney.
*Follow her on Instagram.