Kat Von D is a Mexican-American tattoo artist, musician, model and television personality. She is best known for her appearance on the TLC reality television show LA Ink. She is also notable for being the former head of Kat Von D Beauty. Von D’s book High Voltage Tattoo ranked in the top 10 on the New York Times Best Seller’s List. Born Katherine Von Drachenberg on March 8, 1982 in Monterrey, Nuevo Leon, Mexico, to Argentinian parents Sylvia Galeano and René Drachenberg, she has a sister named Karoline and a brother named Michael. Von D moved with her family to the Los Angeles area at age 4 and grew up in Colton, California. She got her first tattoo at the age of 14. At the age of 16 she quit school to become a tattoo artist. In February 2018, she married Rafael Reyes (artist) with whom she has a son, Leafar Von D Reyes. 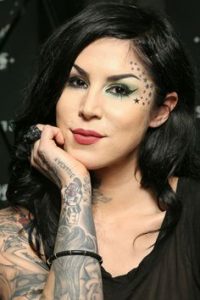 Kat Von D Education:
She quit school at 16 to become a tattoo artist.

Kat Von D Facts:
*She was born on March 8, 1982 in Monterrey, Nuevo Leon, Mexico.
*She is of German, Italian and Spanish descent.
*She was classically trained in piano beginning at age 6.
*She was one of the core tattoo artists on the reality television show LA Ink.
*She collects vintage platform shoes and designer clothing.
*She launched a makeup line through Sephora in 2008.
*She was ranked #62 on the Maxim magazine Hot 100 of 2008 list.
*She is friends with Bam Margera.
*She was engaged to Jesse James (January 20, 2011 – July 26, 2011), and Deadmau5 (December 16, 2012 – June 26, 2013).
*Visit her official website: www.katvondbeauty.com
*Follow her on Twitter, YouTube, Facebook and Instagram.