Natalia Sanchez is a Spanish actress, singer and model. She is most famous for her portrayal of María Teresa “Teté” Capdevila on hit television Los Serrano. Her other television credits include Amar en tiempos revueltos, Acusados, and La ira. She has also starred in the films Hipnos, Los Totenwackers, and El año de la plaga. She formed the youth group Santa Justa Klan, along with Víctor Elías, Adrián Rodríguez and Andrés de la Cruz. Born Natalia Sánchez Molina on March 27, 1990 in Madrid, Spain, to Juana Molina Pa Cual and Francisco Sánchez Mejias, she has one older sister, named Sandra. She began her a career at the age of 6, doing advertising campaigns. 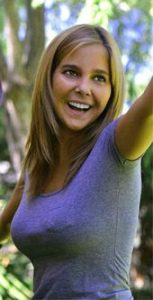 Natalia Sanchez Facts:
*She began appearing on commercials at the age of six.
*She plays the piano, the clarinet, the saxophone, the English horn, the bassoon and the violin.
*She loves tennis and skiing.
*Besides her native Spanish language, she can also speak English and French.
*Visit her official website: www.nataliasanchez.com
*Follow her on Twitter and Instagram.