Michael Jackson was an American singer, dancer, entertainer, and recording artist. The King of Pop who became the most popular entertainer in the world in the early and mid-1980s. He released hits like “Billie Jean,” “Thriller” and “Beat It.” His 1982 album Thriller became the best-selling music album of all time. The album earned him seven more Grammys and eight American Music Awards. Born Michael Joseph Jackson on August 29, 1958 in Gary, Indiana, to Joe and Katherine Jackson, he began his music career alongside his fellow brothers and family members in the Jackson 5. He began his solo career in 1971, and released the best-selling album in history, ‘Thriller,’ in 1982. He was married to Lisa Marie Presley from 1994 to 1996 and Debbie Rowe from 1996 to 1999. He had three children named Prince, Paris and Blanket. 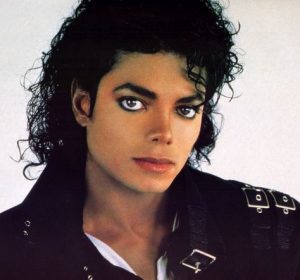 Michael Jackson Facts:
*He was one of nine children.
*He is the older brother of pop diva Janet Jackson.
*He had a black belt in Karate during his childhood.
*His 1982 album, Thriller, is the best-selling music album of all time.
*He is the 7th-highest-certified music artist in the US (81 million album certifications).
*He was a big supporter of research for AIDS.
*He had a skin disease called vitiligo.
*He was good friends with Eddie Van Halen, Macaulay Culkin, Corey Feldman, Mila Kunis, Paul McCartney, Quincy Jones, Eddie Murphy and Uri Geller.
*He was close friends with Diana Ross, Berry Gordy, Freddie Mercury, Elizabeth Taylor, Liza Minnelli, Smokey Robinson, Lionel Richie, Stevie Wonder, Marlon Brando, Carrie Fisher, and Donny Osmond.
*Visit his official website: www.michaeljackson.com