Natalie Dormer is an English actress of film, television, and stage. Dormer achieved recognition for her role of Anne Boleyn on the Showtime series The Tudors, for which she was nominated for two Gemini Awards for Best Performance by a Leading Actress in a Drama Series. She received further recognition for her role as Margaery Tyrell on the hit HBO series Game of Thrones, for which she was nominated for two Screen Actors Guild Awards. She is also known for her roles as Irene Adler on the CBS series Elementary, as Cressida in the science-fiction adventure films The Hunger Games: Mockingjay – Part 1 and Part 2, and as Sara Price/Jess Price in The Forest. She played Dr. Gina Rose in the 2018 British-American action horror film Patient Zero. Born on February 11, 1982 in Reading, Berkshire, England, she is the daughter of Claire Richards and Gary Dormer. She has a sister, Samantha, and a brother, Mark. She studied at Chiltern Edge Secondary School, followed by Reading Blue Coat School in Sonning, Berkshire. She made her film debut in Lasse Hallstrom’s 2005 romantic film Casanova. She became engaged to film director Anthony Byrne in 2011. 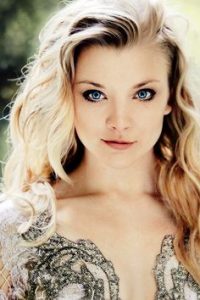 Natalie Dormer Facts:
*She was born in Reading, Berkshire, England on February 11, 1982.
*She was raised by her mother and stepfather.
*She played netball during her school time.
*She speaks French fluently.
*She participated in the 2014 London Marathon.
*She enjoys fencing as a sport, and is a member of the London Fencing Academy.
*She cites Cate Blanchett as an influence on her career.
*Follow her on Facebook and Instagram.