Claire Richards is an English singer, songwriter and dancer. She is best known as the lead vocalist of the dance-pop group Steps. The group was formed in May 1997 by Tim Byrne, Barry Upton and Steve Crosby and released four studio albums, three compilation albums and seventeen singles. Steps split in December 2001 and reformed in 2011. On 3 January 2013, she competed on the reality television series Celebrity Big Brother, where she placed fourth. She also worked as a commentator on the show Loose Women from April to June 2014. Born Claire Anne Richards on August 17, 1977 in London, England, to Nina and Bob Richards, she has one sister named Gemma. Richards began her career in the pop trio TSD. She is married to Reece Hill, with whom she has two children, Charlie and Daisy. She was previously married to Mark Webb. 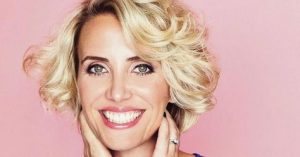