Natalie Glebova is a Russian-Canadian model, television host and beauty pageant titleholder who was crowned Miss Universe 2005. Previously, Glebova was crowned Miss Universe Canada 2005. She participated in the third season of The Amazing Race Asia and in the 2012 edition of Dancing with the Stars Thailand. Born Natalya Vladimirovna Glebova on November 11, 1981 in Tuapse, Russia, to parents Anna Glebova and Vladimir Slezin, she was raised as an only child. Growing up, she studied classical piano and competed in rhythmic gymnastics. Her family immigrated to Toronto, Canada, when she was 13 years old. Following her high school graduation, Glebova worked as a professional model and earned a degree in marketing and information technology management from Ryerson University in Toronto. She began her pageantry career in 2004, competing in Miss Universe Canada 2004, where she placed as the third runner-up. In 2016, Glebova married Panamanian entrepreneur and Mister Panamá 2001 Dean Kelly. Together they have one daughter, Maya Kelly. She was previously married to Thai tennis star Paradorn Srichaphan from 2007 to 2011. 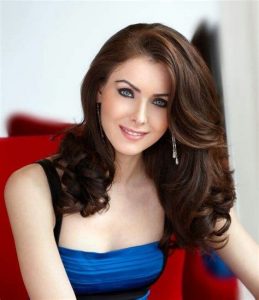 Natalie Glebova Facts:
*She was born on November 11, 1981 in Tuapse, Russia.
*She’s an only child.
*She was crowned Miss Universe Canada 2005 and Miss Universe 2005.
*Before competing in pageantry, she used to work as a motivational speaker for elementary and high school students.
*She published her first book Healthy Happy Beautiful in February 2007.
*She became a brand ambassador for Better Vision in February 2007.
*She became the global brand ambassador for Canadian Ice Diamonds and BSC Cosmetics in 2012.
*Follow her on Twitter, Facebook and Instagram.