Natasha Bedingfield is a British singer and songwriter, best known for her debut album, Unwritten, which achieved remarkable success with over three million copies sold worldwide. For her hit song “Unwritten,” she received a Grammy Award nomination for “Best Female Pop Vocal Performance” in 2007. Her other hits include “Love Like This”, “Pocketful of Sunshine”, “Soulmate” and “I Wanna Have Your Babies.” Born Natasha Anne Bedingfield on November 26, 1981 in Haywards Heath, Sussex, England, UK, to New Zealand-born social workers, John and Molly Bedingfield, she has two brothers, Daniel and Joshua, and a sister, Nikola. She studied psychology at the University of Greenwich. She married Matt Robinson on March 21, 2009. Together they have one son, Solomon Dylan Robinson. 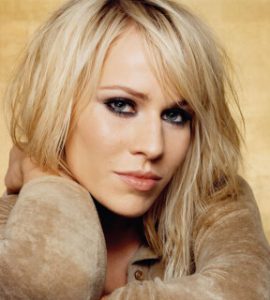 Natasha Bedingfield Facts:
*She was born on November 26, 1981 in Haywards Heath, Sussex, England, UK.
*Her debut album, Unwritten, was released in September 2004.
*She made music for the Hillsong London Church.
*Maxim named her #72 in its 2008 Hot 100 ranking of the world’s hottest women.
*Her celebrity style icons are Audrey Hepburn, Kylie Minogue, Brigitte Bardot and Debbie Harry.
*Visit her official website: www.natashabedingfield.com
*Follow her on Twitter, Facebook, YouTube and Instagram.