Nathan Sykes is a British singer and songwriter, best known for being a member of the British boy band The Wanted whose debut album, The Wanted, peaked at number four on the UK Albums Chart. Nathan appeared with his bandmates in the E! channel reality television series The Wanted Life in 2013. In July 2015 he released his first solo single, “Kiss Me Quick”, which achieved remarkable success, reaching number-one on the US Dance Club Songs chart. Born Nathan James Sykes on April 18, 1993 in Gloucester, England, to parents Harry and Karen Sykes, he has a younger sister named Jessica Sykes. He attended Sylvia Young Theatre School and Ribston Hall High School sixth form. He started singing at the age of six. He’s the youngest member of the band The Wanted. He has dated Dionne Bromfield and singer Ariana Grande. 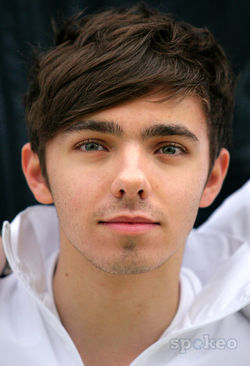 Nathan Sykes Facts:
*He was born on April 18, 1993 in Gloucester, England, UK.
*He has been singing since the age of six.
*His parents divorced and he was raised by his mother.
*He wrote his first love song at the age of fourteen.
*He has asthma.
*Visit his official website: www.nathansykesofficial.com
*Follow him on Twitter, YouTube, SoundCloud, Facebook and Instagram.