Nelson Franklin is an American actor. He is best known for the television work on series such as The Millers, Traffic Light, The Office, New Girl, and Veep. His notable film appearances include: Answer This!, Jobs, Band Aid, and Gemini. Born Nelson Leopold Franklin on July 2, 1985 in Los Angeles, California, USA, to parents Catherine (Deshayes) and Howard Franklin, a screenwriter and director, his step-mother is DJ Anne Litt. He attended high school at Campbell Hall School in Studio City, California, and graduated from The Tisch School of the Arts at NYU with friends Lauren Silvi, Paige Howard and Renée Felice Smith. In 2016, he married actress Georgia Mischak. 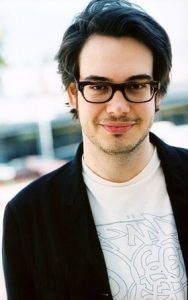 Nelson Franklin Facts:
*He was born on July 2, 1985 in Los Angeles, California, USA.
*His father, Howard, is Jewish.
*He graduated from New York University’s Tisch School of the Arts.
*He is married to actress Georgia Mischak.
*Follow him on Twitter and Instagram.