Claire Danes is an American film and television actress. She is best known for her roles as Angela Chase in the high school drama series My So-Called Life, Temple Grandin in the HBO television film Temple Grandin, and as Carrie Mathison in the Showtime series Homeland. Her notable film roles include Home for the Holidays, Romeo + Juliet, The Rainmaker, Les Misérables, Brokedown Palace, the 1999 English dub of Princess Mononoke, Igby Goes Down, The Hours, Terminator 3: Rise of the Machines, Shopgirl, Stardust, Brigsby Bear, and A Kid Like Jake. Her accolades include three Emmy Awards, four Golden Globe Awards, and two Screen Actors Guild Awards. Born Claire Catherine Danes on April 12, 1979 in Manhattan, New York City, New York, USA, her father, Christopher Danes, is a photographer and her mother, Carla Danes, is an artist. She has an older brother, Asa, who is a corporate lawyer. Her paternal grandfather, Gibson Andrew Danes, was a Dean of the Yale School of Art and Architecture. She belongs to English, German, Scottish, Irish, and Austrian descent. Danes started studying dance when she was six years old. She began acting at the age of 12, and got her first big job working on the Dudley Moore TV sitcom pilot called Dudley at age 13. She made her film debut in Little Women (1994). She was educated at Dalton School, New York, The New York City Lab School for Collaborative Studies, The Professional Performing Arts School and Lycée Français de Los Angeles. She has been married to Hugh Dancy since 2009. They have two sons. 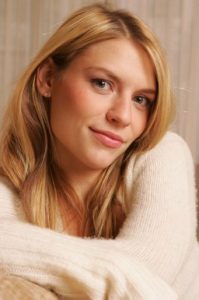 Claire Danes Facts:
*She was born on April 12, 1979 in Manhattan, New York City, New York, USA.
*Her father, Chris, is a photographer and her mother, Carla, is an artist.
*At 6, she started studying dance.
*She attended Yale University, but dropped out to focus on acting.
*People Magazine named her one of the top 50 Most Beautiful People in the World in 1997.
*She is a certified scuba diver.
*Close friends with actor Jason Schwartzman.
*Time named her one of the 100 most influential people in the world in 2012.
*She was awarded a star on the Hollywood Walk of Fame in 2015.
*Her hobbies include surfing, gymnastics and dancing.
*Follow her on Facebook and Instagram.