Nia Long is an American actress who has appeared in several television series and films. She is best known by the public for her roles in television, such as The Fresh Prince of Bel-Air and Third Watch, and in the films Big Momma’s House, Are We There Yet?, Boiler Room, In Too Deep, Boyz n the Hood, Soul Food, Love Jones, and The Best Man. Born Nitara Carlynn Long on October 30, 1970 in Brooklyn, New York, USA to Talita and Doughtry Long, she belongs to Trinidadian, Barbadian, and Granadian descent. She is a 1989 graduate of Westchester High School. She has been in a relationship with basketball player Ime Udoka since 2010 and the couple welcomed a son named Kez in 2011. She was previously in a relationship with Massai Z. Dorsey with whom she had a son, Massai Zhivago Dorsey II in 2000. 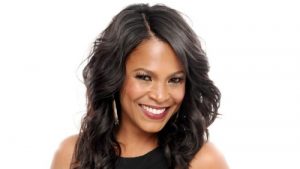 Nia Long Facts:
*She is of Trinidadian, Barbadian, and Granadian descent.
*Her parents divorced when she was two years old.
*People Magazine named her one of the top 50 Most Beautiful People in the World in 2000.
*She was ranked #3 on The 10 Sexiest Women of the Year by Black Men Magazine in 2000.
*She is good friends with F. Gary Gray.
*She has been a long-time supporter of PETA.
*Follow her on Twitter, Google+, Facebook and Instagram.