Niall Horan is an Irish singer, songwriter and guitarist. He is best known as a member of the British-Irish boy band ‘One Direction’, along with Zayn Malik (Left the band in 2015), Liam Payne, Harry Styles and Louis Tomlinson. One Direction released its first album Up All Night in November 2011 under the label of Syco Records, and won a BRIT Award for “What Makes You Beautiful” in 2012. The band also won eight Teen Choice Awards in 2014. In 2016, he released his debut single, “This Town,” followed by his solo album, Flicker, in 2017. Born Niall James Horan on September 13, 1993, in Mullingar, County Westmeath, Ireland to Maura Gallagher and Bobby Horan, his parents separated when he was young. He has one older brother, Greg Horan. At the age 12, he started playing the guitar. He used to performe in Christmas productions with his school choir. 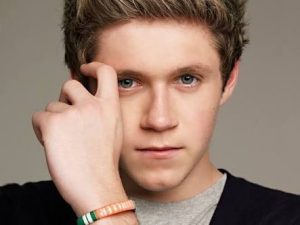 Niall Horan Facts:
*His parents divorced when he was five years old.
*He listened to Frank Sinatra and Dean Martin while growing up.
*He can play guitar.
*He is the only Irish band member from One Direction.
*He is a “Big Swing” fan.
*He is a supporter of English football club Derby County.
*He has a cat named Jess.
*Visit his official website: www.niallhoran.com
*Follow him on Twitter, Facebook and Instagram.