Tracee Ellis Ross is an American actress, model, comedian, and television presenter. She is best known for her portrayal of Joan Clayton in the comedy series Girlfriends and Dr. Rainbow Johnson in the comedy series Black-ish. Her first role was in the 1996 film Far Harbor. Born as Tracee Joy Silberstein on October 29, 1972 in Los Angeles, California to Diana Ross and Robert Ellis Silberstein, she grew up in New York, Paris and Switzerland. She is the half-sister of Rhonda Ross Kendrick, Evan Ross and Ross Naess. She attended Brown University, where she studied acting. 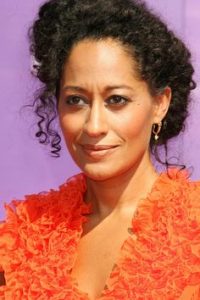 Tracee Ellis Ross Facts:
*She is the daughter of legendary singer Diana Ross
*She enrolled at Brown University to study acting.
*She has acted as an editor and fashion contributor for the leading magazine like Mirabella and New Yorker.
*Visit her official website: www.traceeellisross.com
*Follow her on Twitter, Goolge+, Facebook and Instagram.