Australian actress and model, Nicky Whelan is most famous for her portrayal of Pepper Steiger in the Australian soap opera Neighbours. She appeared in a total of 81 episodes. She also co-starred in the 2011 film Hall Pass. Nicky was born on May 10, 1981 in Victoria, Australia. She has a sister, Katie Brannigan. She married her longtime boyfriend Kerry Rhodes in April 2017. 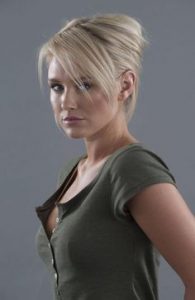 Nicky Whelan Facts:
*Her grandfather Marcus Whelan played in the Australian Football League in the 1930s and ’40s.
*She hosted night racing at Moonee Valley for eight years.
*She was in a relationship with Chad Michael Murray for six-month.
*Became first model to appear in the Pumped Up Down Under calendar for consecutive 2 years.
*Follow her on Twitter, Facebook and Instagram.