Nicolas Cage is an American actor and filmmaker. He is best known for playing the role of Johnny Blaze / Ghost Rider in the 2007 supernatural superhero film Ghost Rider. He played Ben Sanderson in the 1995 film Leaving Las Vegas, for which he won the Academy Award for Best Actor. He has also starred in the films The Rock, Left Behind, National Treasure, Kick-Ass, Adaptation, Moonstruck, and 60 Seconds. Born as Nicholas Kim Coppola on January 7, 1964 in Long Beach, California, USA, he is the son of choreographer Joy Vogelsang and literature professor August Coppola, and younger brother of Marc Coppola and Christopher Coppola. His uncle is director Francis Ford Coppola. He is of Italian descent on his father’s side, and of Polish, German, and English descent on his mother’s side. He was raised in a Catholic family. He married Alice Kim in 2004, he was previously married to Patricia Arquette from 1995 to 2001 and Lisa Marie Presley from 2002 to 2004. He has sons named Weston Coppola and Kal-El Coppola. 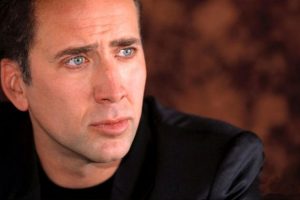 Nicolas Cage Facts:
*He had the desire of becoming an actor from an early age.
*He used to work as a popcorn seller in a film theater.
*He has a lizard tattoo wearing top hat on his back.
*He is a big fan of Elvis Presley.
*He was once engaged to Kristen Zang.
*He was ranked #37 in Premiere’s 100 most powerful people in Hollywood in 1998.
*He is close friend of Crispin Glover, Tom Waits and Neil Peart.
*Catch Nicolas on Myspace.