Filipino-American actress, Nicole Gale Anderson is most famous for her portrayal of Heather Chandler on The CW series Beauty & the Beast. She is also known for roles in the Disney Channel Original Series Jonas, and on the ABC Family series Make It or Break It and Ravenswood. Nicole was born on August 29, 1990 in Rochester, Indiana, USA. Her mother, Anami Anderson, was born in the Philippines and moved to the United States with her father, Kevin Anderson, a Commander in the United States Navy. She is of British, Swedish, German descent on her father’s side, and of Filipino and Spanish descent on her mother’s side. She has a sister, Nadinen and a brother, Kenn. 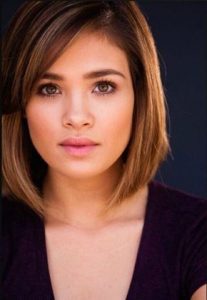 Nicole Gale Anderson Facts:
*Her ancestry includes Filipino, Spanish, Swedish, Irish and German.
*As a child, she competed in gymnastics on a national level.
*She commenced her career as a print model and commercial actor.
*She has pets, a cat, Trip Fontaine and an American Eskimo dog, Fendi.
*Follow her on Twitter and Instagram.