Nicole Richie is an American fashion designer, actress, author and television personality. She came to prominence after being cast in the reality television series, The Simple Life (2003–2007), alongside her childhood best friend and fellow socialite Paris Hilton. From 2012 to 2013, she became a mentor on the NBC series, Fashion Star. Born Nicole Camille Escovedo on September 21, 1981 in Berkeley, California, USA, to Karen and Peter Michael Escovedo, she was adopted by singer Lionel Richie and his then-wife, Brenda Harvey. She has two Younger half siblings, Miles Brockman and Sofia Richie. After graduating from Montclair College Prep School in 1999, she attended the University of Arizona for Arts and Media. She first met Paris Hilton while studying at The Buckley School. On December 11, 2010, she married singer Joel Madden. Together they have two children: a daughter, Harlow, and a son, Sparrow. 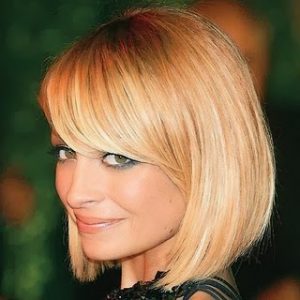 Nicole Richie Facts:
*She has Mexican, English, and African-American ancestry.
*She attended The Buckley School with her best friend Paris Hilton.
*Her dad was a good friend of Lionel Richie and had also worked with him for a short time.
*She was ranked #37 on the Maxim magazine Hot 100 of 2005 list.
*She is good friends with actress Mischa Barton, and Jessica Alba, and friends with singer Fefe Dobson.
*She has an exotic Bengal cat named Chi-Chi-Cheeta.
*Visit her official website: www.nicolerichie.com
*Follow her on Twitter, Facebook and Instagram.