German figure skater who is the 2016 CS Warsaw Cup champion, the 2017 CS Tallinn Trophy bronze medalist, a two-time NRW Trophy champion, and a four-time German national champion. Schott has finished within the top ten at three European Championships and placed 18th at the 2018 Winter Olympics. Born on September 12, 1996 in Essen, Germany, her father played ice hockey and her younger sister, Vivienne Schott, has competed in figure skating. Schott began skating in 1999. She represented Germany at the World Junior Championships in Gangneung, South Korea in March 2011. Schott won her first senior international medal, gold, at the NRW Trophy in November 2014. 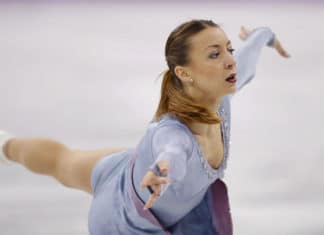 Nicole Schott Facts:
*She was born on September 12, 1996 in Essen, Germany.
*Her father played ice hockey.
*Her younger sister, Vivienne Schott, has competed in figure skating
*She began skating in 1999.
*She won the German national senior title in January 2012.
*She competed at the 2018 Winter Olympics and finished 18th.
*She withdrew from the 2018 Grand Prix of Helsinki due to the flu.
*Follow her on Instagram.