Nicole Polizzi is a Chilean-American reality television personality, best known as a cast member of the MTV reality show Jersey Shore and starring in Snooki & Jwoww and Jersey Shore: Family Vacation. She also appeared as the guest hostess for WWE Raw in 2011 and competed at WrestleMania XXVII that same year. Born Nicole Elizabeth Polizzi on November 23, 1987 in Santiago, Chile, Snooki was adopted and raised by Italian American parents. She was educated at Marlboro High School in Marlboro, New York. Since November 29, 2014, she has been married to Jionni LaValle with whom she has three children. 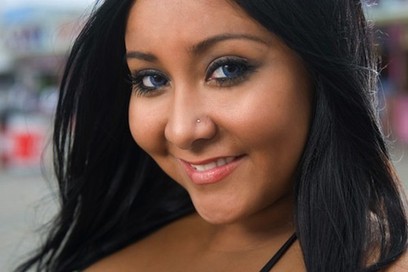 Nicole Polizzi Facts:
*She was born on November 23, 1987 in Santiago, Chile.
*She is of Chilean descent and was adopted when she was 6 months old.
*She was a cheerleader in high school.
*She received her nickname “Snooki” when she was in high school.
*She became one of the highest-paid reality stars when she was generating over $150,000 per episode in season 5 of Jersey Shore.
*Visit her official website: www.snookinicole.com
*Follow her on Twitter, YouTube, Facebook and Instagram.