Nicole Williams is a Canadian model, best known for her appearance in the E! Reality Series WAGS, which ran for three seasons between 2015 and 2017. Nicole started out modeling for several agencies such as Models Los Angeles, Major Models New York, Muse Management South Africa, Next Toronto, FM London, Mega Models Miami, and Wilhelmina New York. She has amassed more than 1.5 million followers on her justtnic Instagram account. Born Nicole Lynn Williams on March 17, 1986, in Toronto, Canada, she has done many lingerie works. In September 2016, Nicole became engaged to former NFL player Larry English, whom she had been dating since 2013. They married on May 19, 2017. 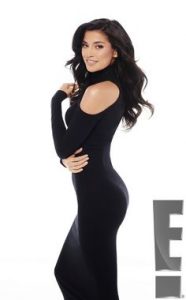 Nicole Williams Facts:
*She was born on March 17, 1986, in Toronto, Canada.
*She is best known for being cast in the E! network reality series WAGS, which stands for Wives and Girlfriends of professional athletes.
*She has her own swimwear collection dubbed Nia Lynn.
*She married former NFL player Larry English in May 2017.
*Follow her on Twitter and Instagram.