Robert Downey Jr. is an American actor and singer. He is best known for his roles in the films Iron Man, The Avengers, Tropic Thunder, Zodiac, The Judge, Chaplin, and Sherlock Holmes. He received a Golden Globe Award for Best Supporting Actor for his performance in Ally McBeal in 2000 and another for Best Actor for his performance in Sherlock Holmes in 2009. Born Robert John Downey Jr. on April 4, 1965 in Manhattan, New York City, New York, USA, to writer, director and filmographer Robert Downey Sr. and actress Elsie Ford, he has an older sister named Allyson. He is of half Lithuanian Jewish, one-quarter Hungarian Jewish, and one-quarter Irish descent on his father’s side, and of Scottish, German, and Swiss descent on his mother’s side. He played minor roles in his father’s films during his childhood. He made his acting debut at 5, playing a sick puppy in the 1970 absurdist comedy Pound. He attended Santa Monica High School in California. He has been married to Susan Downey since August 27, 2005. He was previously married to Deborah Falconer. He is the father of three children. 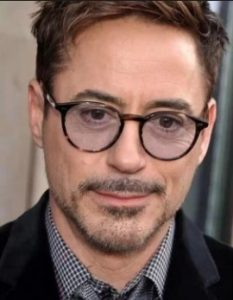 Robert Downey Jr. Facts:
*He was born on April 4, 1965 in Manhattan, New York City, New York, USA.
*His father is an actor and filmmaker, while his mother was an actress.
*His father was a drug addict and so, he also used drugs at the age of 6.
*His parents got divorced when he was thirteen years old.
*As a child, he was a huge fan of the Iron Man comics.
*Robert is a martial artist and he devotes much of his free time to his practice of Wing Chun.
*He was once stopped by police after driving n*ked in his Porsche, and found not only to be without clothes, but in possession of cocaine, heroine and a .357 Magnum.
*He dated actress Sarah Jessica Parker in 1984.
*Follow him on Twitter, Google+, Facebook and Instagram.