American politician who served as the 29th United States Ambassador to the United Nations under President Donald Trump from 2017 to 2018. Nikki previously served as the 116th Governor of South Carolina from 2011 to 2017. She is a member of the Republican Party and was the first female governor of South Carolina and the first female Indian-American governor elected in the United States. Born Nimrata Nikki Randhawa on January 20, 1972 in Bamberg, South Carolina, to Sikh immigrants, she has one sister and two brothers. Nikki graduated from Clemson University with a Bachelor of Science degree in accounting. She has been married to Michael Haley since September 1996. They have a daughter and son, Rena and Nalin. 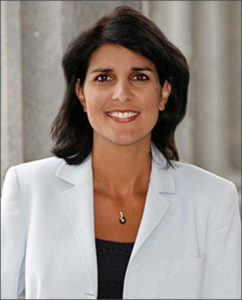 Nikki Haley Facts:
*She was born on January 20, 1972 in Bamberg, South Carolina, USA.
*Her parents were immigrated to the United States from Amritsar District, Punjab, India.
*She earned a Bachelor of Science degree at Clemson University.
*She served as U.S. Ambassador to the United Nations from January 2017 to December 2018.
*She converted to Christianity in 1997.
*Visit her official website: www.NikkiHaleyBook.com
*Follow her on Twitter, Facebook and Instagram.