Bulgarian-Canadian actress, Nina Dobrev is most famous for her portrayal of Elena Gilbert/Katherine Pierce in the supernatural drama TV series The Vampire Diaries. She played the role of Mia Jones, the single teenage mother, in the drama series Degrassi: The Next Generation. She has also starred in such films as The Roommate, The Perks of Being a Wallflower, xXx: Return of Xander Cage and 2014 action comedy Let’s Be Cops. Born in Sofia, Bulgaria, on January 9, 1989, to Michaela Konstantinova and Konstantin Dobrev, Nikolina Constantinova Dobreva grew up in Toronto, Ontario. She has an older brother named Alexander Konstantinov Dobrev. In 2017, she began dating Glen Powell. 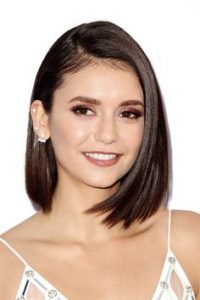 Nina Dobrev Facts:
*Her father is a computer specialist, and her mother is an artist.
*She is fluent in French, English, and Bulgarian.
*She is a very skilled ballet and jazz dancer and gymnast.
*She was named number 44 in the 2011 FHM Australia list of “100 Sexiest Women in the World”.
*She was named after her maternal grandmother Nikolina Constantine.
*She has two pets, a dog and a cat.
*She’s a huge fan of the Netflix series, House of Cards (2013), and “Harry Potter” series, by J.K. Rowling.
*Visit her official website: www.ninadobrev.com
*Follow her on Twitter, Facebook and Instagram.