Ninel Conde is a Mexican singer, actress and television presenter. She is best known for her starring roles in the series Fuego en la sangre, Rebelde and Mar de amor and Porque el amor manda. She made her acting debut in 1995 with a small role on the series Al derecho y al derbez. She has released three Latin pop albums to date, Ninel Conde, La Rebelde and Ayer y Hoy. Ninel was born Ninel Herrera Conde on September 29, 1970 in Toluca, Estado de Mexico, Mexico. She studied theater and corporal expression in the Center of Art and Theater Emilia Carranza, later she studied acting and singing classes with Sergio Jiménez. She was previously married to Ari Telch and Juan Alberto Zepeda Méndez. 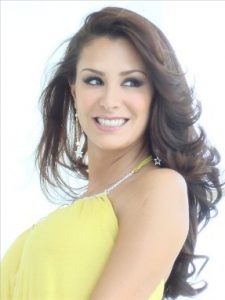 Ninel Conde Facts:
*She worked as a Judge on the 4th season of Univision’s dancing competition Mira Quien Baila in September 2013.
*She joined the 3rd edition of the reality show Big Brother VIP in 2004 and was voted-off after 43 days of confinement.
*From September 2013 to March 2017, she was in a relationship with Giovanni Medina with whom she had a son in 2017.
*Visit her official website: www.ninel-conde.com.mx
*Follow her on Twitter, Myspace, Facebook and Instagram.