Noomi Rapace is a Swedish actress. She is best known for her portrayal of Lisbeth Salander in the Swedish film adaptations of the Millennium series: The Girl with the Dragon Tattoo, The Girl Who Played with Fire, and The Girl Who Kicked the Hornets’ Nest. In 2011, Rapace was nominated for a BAFTA Award for Best Actress for her performance in The Girl with the Dragon Tattoo, and for an International Emmy Award for Best Actress for the miniseries version of the trilogy. Rapace’s other roles include starring as Anna in Daisy Diamond, Leena in Beyond, Anna in The Monitor, Madame Simza Heron in Sherlock Holmes: A Game of Shadows, Dr. Elizabeth Shaw in Prometheus, Beatrice in Dead Man Down, Raisa Demidova in Child 44, and the seven lead roles in What Happened to Monday. 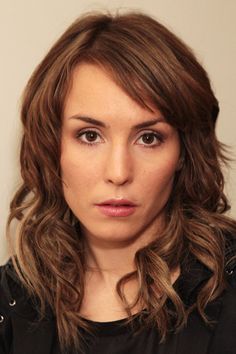 Born Noomi Norén on December 28, 1979 in Hudiksvall, Gävleborgs län, Sweden, her father, Rogelio Durán, was a Spanish Flamenco singer from Badajoz, and her mother, Nina Norén, is a Swedish actress. At age five, Noomi moved from her native Sweden to Flúðir in Iceland with her mother and stepfather. She married Swedish actor Ola Norell in 2001, and the couple had a son named Lev in 2003 before getting divorced in 2011.

Noomi Rapace Facts:
*She was born on December 28, 1979 in Hudiksvall, Gävleborgs län, Sweden.
*Her sister, Særún Norén, is a photographer.
*She made her film debut in a minor role in the Icelandic film In the Shadow of the Raven (1988).
*She made her English-language film debut in Guy Ritchie’s Sherlock Holmes: A Game of Shadows (2011).
*Besides her native Swedish language, she can also speak Icelandic, Danish, Norwegian and English.
*Follow her on Facebook.