Nora Fatehi is a Canadian dancer, actress, model and singer who appears mainly in Hindi films, in addition to Malayalam and Telugu films. She is known for her appearances in the films Temper, Baahubali, Crazy Cukkad Family, Double Barrel, Bharat, Kayamkulam Kochunni, Mr. X, and Kick 2. She appeared on Season 9 of Bigg Boss as a wild card, and lasted for 25 days. Fatehi also appeared in the reality television dance show Jhalak Dikhhla Jaa in 2016. Born on February 6, 1992 in Quebec City, Canada, to Moroccan parents, she has one younger brother named Omar. Fatehi moved to Mumbai to pursue her acting career in 2013. She began her acting career by appearing in a Bollywood film Roar: Tigers of the Sundarbans (2014). 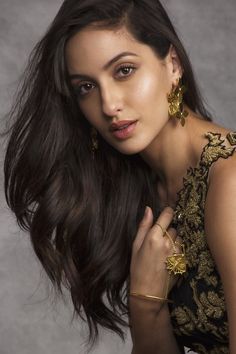 Nora Fatehi Facts:
*She was born on February 6, 1992 in Quebec City, Canada.
*In 2013, she moved to Mumbai to pursue acting.
*She made her film debut in the action adventure film ROAR: Tigers of the Sundarbans in 2014.
*In 2015, she was a contestant on the reality television show Bigg Boss 9.
*She appeared in the hit song Naah by Harrdy Sandhu in 2017.
*She speaks English, Hindi, French, and Arabic fluently.
*Follow her on Twitter, Facebook, Youtube and Instagram.