Arizona Muse is a British-American fashion model who has appeared in editorials for French, American, Russian, Chinese, British, Korean, Spanish, Portuguese, and Italian Vogue, Numéro, V, W, and Dazed & Confused. She has also appeared on the cover of the Chinese, Mexican, Portuguese, Russian, Australian, Spanish, Greek, Korean, Turkish and Ukrainian Vogue and Numéro, and Dazed & Confused. In November 2011, Muse appeared on the cover of Vogue Paris. She became the face of Prada in 2011. She is represented by the agencies VIVA Model Management, Next Management, and Chic Management. Born Arizona Grace Muse on September 18, 1988 in Tucson, Arizona, to parents Davina and Garry Muse, she grew up in Santa Fe, New Mexico. Muse was named after her birth state – Arizona. She graduated from Sante Fe Preparatory School, Santa Fe, New Mexico in 2007. On June 17, 2017, Muse married Boniface Verney-Carron. She has two children: a son Nikko Quintana Muse with ex-fiancé Manuel Quintana and a daughter Cy Quinn Verney-Carron with her husband Boniface Verney-Carron. 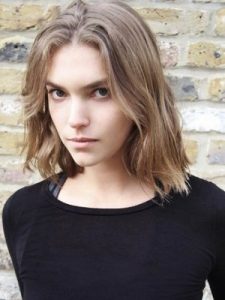 Arizona Muse Facts:
*She was born in Tucson, Arizona, to an English mother and American father.
*She started her career in 2008, but her career didn’t really take off until the birth of her son, which happened when she was 19.
*She has appeared on American, Chinese, Spanish, Australian, Italian, Korean, French, Russian and British Vogue.
*She ranked #3 on models.com’s list of the Top 50 Female Models List in September 2012.
*Follow her on Twitter and Instagram.