Award-winning actress who made her film debut in the 1996 drama A Time to Kill. Following a decade of brief roles in film and television, Spencer rose to fame after winning an Academy Award for her portrayal of Minny in 2011’s ‘The Help.’ She won the National Board of Review Award for Best Supporting Actress for her role in Ryan Coogler’s 2013 biopic Fruitvale Station. She also received Golden Globe and Oscar nominations for her role of NASA mathematician Dorothy Vaughan in the 2016 biopic Hidden Figures, and for her supporting role in the 2017 sci-fi drama The Shape of Water. She has also played prominent roles in the films Smashed, Snowpiercer, Get on Up, The Divergent Series, Gifted, Instant Family, Onward, The Shack, Luce, and Ma. Spencer’s television credits include work for such series as Mom, Wizards of Waverly Place, ER, Red Band Society, Truth Be Told, and Self Made. She was a producer on the 2019 Oscar winning film Green Book. 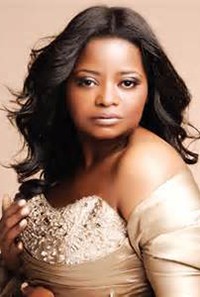 Books: The Case of the Time-Capsule Bandit, The Sweetest Heist in History

Octavia Spencer Facts:
*She was born Octavia Lenora Spencer on May 25, 1970 in Montgomery, Alabama, USA.
*She has six brothers and sisters.
*She graduated from Auburn University with a Bachelor’s degree in Liberal Arts.
*She made her film debut as a nurse in Joel Schumacher’s A Time to Kill (1996).
*She made her stage debut in 2003 in Los Angeles, in Del Shores’ play, The Trials and Tribulations of a Trailer Trash Housewife.
*Her accolades include an Academy Award, a Golden Globe Award, and three Screen Actors Guild Awards.
*She is the first black actress to receive two consecutive Academy Award nominations in back-to-back years.
*She was named one of the ’25 Funniest Actresses in Hollywood’ by Entertainment Weekly in April 2009.
*She is good friends with Melissa McCarthy, and friends with Viola Davis.
*She is a lover of antiques.
*Follow her on Twitter and Instagram.