MattyBRaps is an American singer-songwriter, rapper, dancer and actor. He is best known for his remix videos of popular music on his YouTube channel ‘MattyBRaps’, where he has more than 14 million subscribers and growing. MattyBRaps’s debut EP premiered on YouTube, titled Outside the Lines, on August 27, 2015. He released a memoir book, That’s a Rap, with the help of writer Travis Thrasher in June 2016. He has appeared in numerous television shows such as Today, The Wendy Williams Show, Dr. Phil, and The Queen Latifah Show. He has also featured other artists, including James Maslow, Vanilla Ice, and Carson Lueders. Born Matthew David Morris on January 6, 2003 in Atlanta, Georgia, to parents Blake and Tawny Morris, his siblings are Sarah, Blake Jr., John and Joshua. He is the cousin of the rapper MarsRaps. 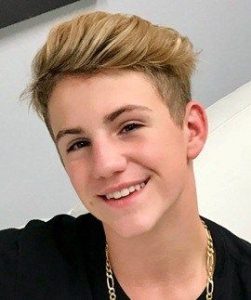 MattyBRaps Facts:
*He was born on January 6, 2003 in Atlanta, Georgia, USA.
*He began his music career in 2010.
*His first cover was of “Eenie Meenie” by Justin Bieber.
*Billboard Magazine listed him as a Top 21 Under 21 in 2013
*He has his own record label, publishing company, and concert and touring company.
*He is close friends with actor Christian Beadles.
*He is a big fan of Michael Jackson.
*He has a celebrity crush on Ariana Grande.
*Visit his official website: www.mattybraps.com
*Follow him on Twitter, YouTube, Facebook and Instagram.