British-born American actor who was one of classic Hollywood’s definitive leading men. Best remembered by the public for his role as Roger Thornhill in the 1959 hit ‘North by Northwest’. Grant also starred in such films as None but the Lonely Heart, Penny Serenade, Operation Petticoat, The Philadelphia Story, Houseboat, The Awful Truth, That Touch of Mink, Charade, Father Goose, Only Angels Have Wings, His Girl Friday, Notorious, and The Grass Is Greener. Born Archibald Alec Leach on January 18, 1904 in Horfield, Bristol, United Kingdom, to parents Elsie Maria and Elias James Leach, Grant ran away from home at age 13 to join a mime troupe. His father tracked him down and brought him home, but he ran away again and rejoined the troupe. He moved to the United States around 1920, and became an American citizen on June 26, 1942, under naturalization certificate #5502057. He was married five times and had a daughter, actress Jennifer Grant, with his former wife, actress Dyan Cannon. He died of a stroke on November 29, 1986. His body was cremated. 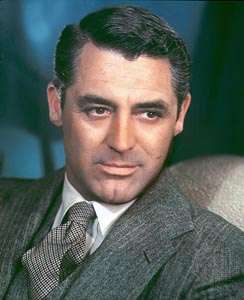 Cary Grant Facts:
*He was born on January 18, 1904 in Horfield, Bristol, United Kingdom.
*He had a fear of knives and a fear of heights as a child.
*He was largely self-educated, as he had dropped out of school at age 14.
*He appeared in over 20 radio-programs, usually Lux Radio Theatre in the 1930s.
*He began acting in Broadway plays in the 1920s, going by his birth name Archie Leach.
*He made his film debut with a minor role in This Is the Night (1932).
*He was awarded a Star on the Hollywood Walk of Fame at 1610 Vine St. on February 8, 1960.
*He was ranked #7 in “Empire” (UK) magazine’s “The Top 100 Movie Stars of All Time” list in October 1997.
*He was voted the sixth Greatest Movie Star of all time by “Entertainment Weekly”.
*His favorite aftershave was Acqua Di Parma.
*He became a US citizen on June 26, 1942.
*He was once engaged to Queenie Smith.
*As a young actor, he shared a flat with Ballard Berkeley.
*His estate was valued at $60 million at the time of his death.
*He was a lifelong Republican.