Israeli film and television actor who is known for his roles in The Mummy and its sequel The Mummy Returns, Resident Evil: Apocalypse, Resident Evil: Extinction, Resident Evil: Retribution, Sleeper Cell, Charmed, and the TV series V. He made his film debut in 1984, with the film Kiss of Fire. Fehr was born on November 23, 1970 in Tel Aviv, Israel to Jewish parents, Gila and Uri Fehr. He has an older brother, a sister, and a younger half-sister. He married Rhonda Tollefson in 2000. They have three children: son, Atticus, and two daughters, Finley, and Azelie. 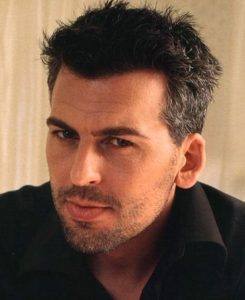 Oded Fehr Facts:
*He belongs to Ashkenazi Jewish descent.
*From 1989 to 1992, he served in the Israeli Navy, and also worked for security for the Israeli airline El Al in Germany.
*He is fluent in English, Hebrew and a bit of German.
*Follow him on Twitter.