Actress and model, Moon Bloodgood is famous for her portrayal of Lt. Blair Williams in the film Terminator Salvation, and Anne Glass in the TNT television series Falling Skies. Moon was born to Shell Bloodgood and Sang Cha, on September 20, 1975 in Alliance, Nebraska, USA as Korinna Moon Bloodgood. She is of Dutch and Irish descent on her father’s side, and of Korean descent on her mother’s side. She has been married to Grady Hall since 2011. They have two children: son, Archie, and daughter, Pepper. She was previously in a relationship with Eric Balfour from 2006 until 2007. 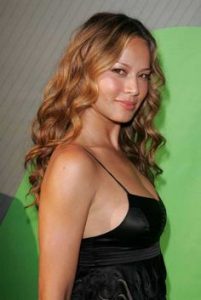