Oliver Sykes is an English musician, best known as the lead singer of the British hard rock band, Bring Me The Horizon. The band released their debut full-length studio album Count Your Blessings in 2006, which reached the top 100 of the UK Albums Chart and the top 10 of the UK Rock & Metal Albums Chart. He is also the founder and owner of the alternative clothing line, Drop Dead Clothing. In February 2013, Sykes launched a Kickstarter project to fund a graphic novel created by him and Drop Dead Clothing artist Ben Ashton-Bell, entitled Raised by Raptors. 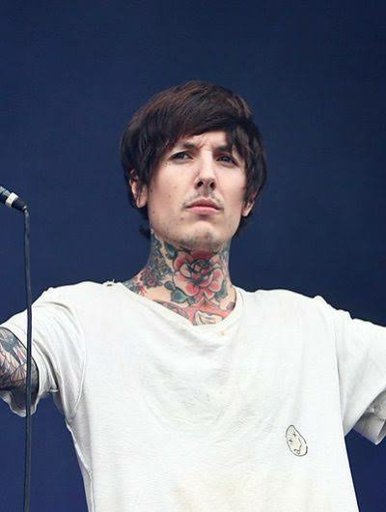 Born Oliver Scott Sykes on November 20, 1986 in Ashford, to parents Carol and Ian Sykes, Sykes moved to Australia when he was young and returned to the U.K. when he was about eight, settling in Stocksbridge in Sheffield, South Yorkshire. Sykes married Instagram star Alissa Salls in July 2017. He was previously married to Hannah Snowdon.

Oliver Sykes Facts:
*He was born on November 20, 1986 in Ashford, UK.
*He has suffered from a form of night terrors known as sleep paralysis since the age of twelve.
*He was educated at Stocksbridge High School and Barnsley College.
*He has cited Pantera, Every Time I Die, Skycamefalling, Poison the Well, Black Flag, Misfits, Linkin Park, Simple Plan, Norma Jean and The Dillinger Escape Plan.
*He became a vegetarian in 2003 at age 16 after watching a documentary about animal cruelty online, “When I saw how animals are tortured on factory farms, I couldn’t justify being a part of that cruelty.”
*He became a vegan in 2013.
*He dated Amanda Hendrick in 2008.
*Follow him on Twitter and Instagram.