Olivia Cooke is an English actress. She is best known for her portrayal of Emma Decody in the A&E drama thriller series Bates Motel, and for her role as Becky Sharp in the period drama miniseries Vanity Fair. Cooke’s well-known films include Ouija, Me and Earl and the Dying Girl, The Limehouse Golem, Thoroughbreds, and the Steven Spielberg–directed science fiction film Ready Player One. Born Olivia Kate Cooke on December 27, 1993 in Oldham, Greater Manchester, England, to parents Lindsy and John Cooke, she has one younger sister named Eleanor. Cooke studied theatre at Oldham Sixth Form College and performed during her childhood years with the Oldham Theatre Workshop. In 2020, Cooke began dating Jacob Ifan. She was previously in a relationship with actor Christopher Abbott from 2015 to 2019. 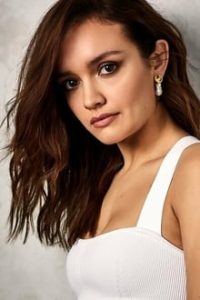 Olivia Cooke Facts:
*She was born on December 27, 1993 in Oldham, Greater Manchester, England, UK.
*Her full name is Olivia Kate Cooke.
*She started acting when she was eight years old at the Oldham Theatre Workshop, an after-school drama programme in her hometown.
*She made her professional performance debut in a One Direction music video in 2012.
*She supported the Save The Children campaign by appearing in Bulgari advertisements in 2014.
*Visit her official website: www.olivia-cooke.com
*Follow her on Instagram.