Hannah Marks is an American actress, best known for her starring role as Amanda Brotzman in the BBC America original Dirk Gently’s Holistic Detective Agency. Marks was part of the regular cast of the USA Network show Necessary Roughness, playing Lindsay Santino. She is also known for her recurring role as Gloria on MTV’s Awkward. Marks’s well-known films include Accepted, Punk’s Dead, The Runaways, Daniel Isn’t Real, I Used to Go Here and Anesthesia. She received Young Artist Award nominations for her work in the film Accepted and for her guest spot in the TV series FlashForward. Born Hannah Gayle Marks on April 13, 1993 in Los Angeles County, California, to parents Nova Ball and Robin Marks, she grew up in San Luis Obispo, California. 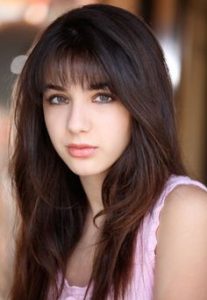 Hannah Marks Facts:
*Born on April 13, 1993 in Los Angeles County, California, she is the daughter of former actor Nova Ball.
*She is the granddaughter of musician Ernie Ball, and the great-great granddaughter of “When Irish Eyes Are Smiling” composer Ernest Ball.
*She was featured in the cover story of the June 4, 2006 “New York Times” Magazine.
*She starred as Lindsay Santino in the USA Network series Necessary Roughness.
*She played Amanda Brotzman on the television series Dirk Gently’s Holistic Detective Agency from 2016 to 2017.
*She was named one of Rolling Stone’s 25 Under 25 Artists Changing the World in July 2017.
*She was named as one of Forbes 30 Under 30 (2020).
*Visit her official website: www.hannahmarks.com
*Follow her on Twitter and Instagram.