Orlando Jones is an American actor and stand-up comedian. He is best known for being one of the original cast members of the sketch comedy series MADtv and for his role as the African god Anansi on Starz’s American Gods. Jones’s other notable works include The Orlando Jones Show, Father of the Pride, I Think I Love My Wife, Primeval, The Evidence, Beyond a Reasonable Doubt, The Adventures of Chico and Guapo, Seconds Apart, Enemies Closer, The Book of Love, Black Dynamite, and Sleepy Hollow. 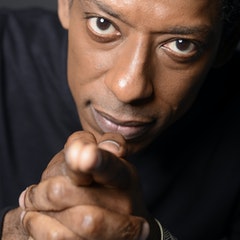 Born on April 10, 1968 in Mobile, Alabama, Jones’s father was a professional baseball player in the Philadelphia Phillies organization. He was educated at Mauldin High School and College of Charleston. He married former model Jacqueline Staph in January 2009. They have two children.

Orlando Jones Facts:
*He was born on April 10, 1968 in Mobile, Alabama, USA.
*With comedian Michael Fechter, Jones formed a production company called Homeboy’s Productions and Advertising.
*He debuted as a producer with the 1993 show The Sinbad Show.
*He is a vegan.
*Visit his official website: www.orlandojones.com
*Follow him on Twitter and YouTube.