Nikki Reed is an American actress, screenwriter, producer and singer-songwriter. She is best known for her portrayals of vampire Rosalie Hale in The Twilight Saga and as Evie Zamora in the teen drama film Thirteen, directed by Catherine Hardwicke, for which she was credited with Hardwicke as a co-writer of the screenplay. She has also starred in the films Cherry Crush, Familiar Strangers, Last Day of Summer, Chain Letter, Enter the Dangerous Mind, Balls Out, In Your Eyes, About Scout, and Jack Goes Home. From 2015 to 2016, Reed starred as Betsy Ross in the Fox supernatural drama series Sleepy Hollow. 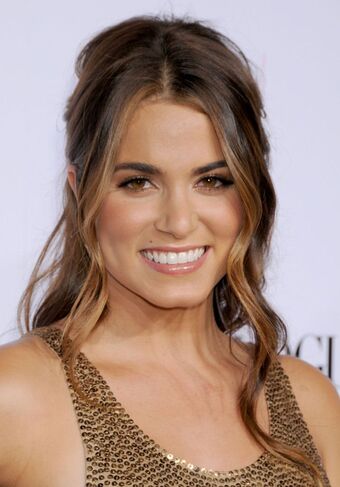 Born Nicole Houston Reed on May 17, 1988 in West Los Angeles, California, to parents Cheryl Houston and Seth Reed, her parents divorced when she was just two years old, and she was raised by her mother. Her older brother, Nathan August Reed, is a professional photographer. She has been married to Ian Somerhalder since April 26, 2015. Together they have one daughter, Bodhi Soleil Reed Somerhalder. She was previously married to season ten American Idol contestant Paul McDonald.

Nikki Reed Facts:
*Born on May 17, 1988 in West Los Angeles, California, she grew up in Culver City, California.
*Her mother is a Christian of Cherokee and Italian descent, and her father is Jewish.
*Her parents divorced when she was 2.
*She rose to fame in 2003 with Thirteen.
*She was ranked #42 in the 2009 Maxim “Hot 100 Women” list.
*She is a fan of Liam Neeson.
*She is close friends with Evan Rachel Wood, Catherine Hardwicke, Kellan Lutz, Taylor Lautner, Peter Facinelli, Elizabeth Reaser, Kristen Stewart, Ashley Greene, and Jackson Rathbone.
*She enjoys horse riding.
*She has a pitbull dog named Sydney.
*Follow her on Twitter, Facebook and Instagram.