Padma Lakshmi is a model, actress, author and television host. She wrote her first cookbook, Easy Exotic, in 1999, for which she won her the “Best First Book” award at the 1999 Gourmand World Cookbook Awards. She is the host of Bravo’s Emmy award winning Top Chef. She was born as Padma Parvati Lakshmi Vaidynathan, in India and grew up in America. She began her career as a fashion model, working in Europe and the US. She was married to Salman Rushdie from 2004 to 2007. 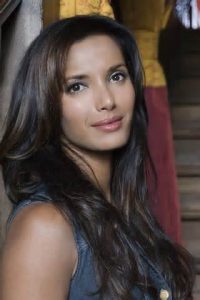 Padma Lakshmi Facts:
*She is fluent in five languages.
*Her parents separated when she was two years old, and both parents later remarried.
*One of People magazine’s 100 Most Beautiful People in the World (2007).
*She was placed #87 on the Maxim magazine Hot 100 of 2007 list.
*At age 14, she was in an car accident, which left visible scars on her right arm.
*Follow her on Twitter, Facebook and Instagram.