Matt Damon is an American actor, filmmaker, screenwriter best known for roles in the films ‘Good Will Hunting,’ ‘The Jason Bourne series,’ ‘The Martian,’ ‘The Talented Mr. Ripley,’ ‘the Ocean’s trilogy,’ and ‘Behind the Candelabra.’ Born and raised in Cambridge, Massachusetts, Damon began his acting career by appearing in high school theater productions and he made his professional acting debut in the film Mystic Pizza (1988). Matt has an older brother named Kyle who is now a sculptor. His father is of English and Scottish descent, and his mother is of Finnish and Swedish ancestry. 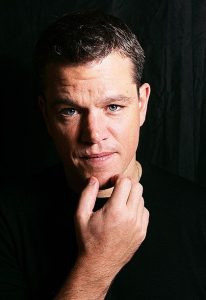 Matt Damon Facts:
*His parents separated when he was two years old.
*He belongs to American, Scottish, English, Finnish and Swedish descent.
*He is a supporter of the Democratic Party.
*He is best friends with Ben Affleck.
*He quit smoking after visiting a hypnotist in L.A.
*He lost 30 lbs for his role in the film The Talented Mr. Ripley.
*As a teenager, he used to dance in the middle of the Harvard Square to earn money.
*He appeared twice on the cover of GQ magazine: December ’99 and August ’07.
*One of People magazine’s 50 Most Beautiful People in the World (1998).
*People magazine named him “Sexiest Man Alive” in 2007.