Paige Turco is an American actress. She is best known for her role as April O’Neil in Teenage Mutant Ninja Turtles II: The Secret of the Ooze and Teenage Mutant Ninja Turtles III. She is also known for her portrayal of Abigail Griffin in the post-apocalyptic drama series The 100, and for her role as graphic artist Terri Lowell in the CBS drama series The Agency. Turco’s other notable works include Guiding Light, All My Children, American Gothic, NYPD Blue, Party of Five, Big Shots, and Person of Interest. Born Jean Paige Turco on May 17, 1965 in Boston, Massachusetts, to parents David Vincent Turco and Joyce Jean (Jodoin), her ancestry includes Italian, French and English. She was educated at Walnut Hill School in Natick, Massachusetts, and performed as a soloist at the New England Dance Conservatory, the Amherst Ballet Theatre Company, and the Western Massachusetts Ballet Company. She graduated in 1987 from Bay Path College in Longmeadow, Massachusetts and majored in drama at the University of Connecticut. She married Irish actor Jason O’Mara in 2003, and the couple had a son named David in 2004 before getting divorced in 2017. 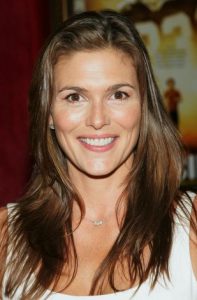 Paige Turco Facts:
*She was born on May 17, 1965 in Boston, Massachusetts, USA.
*She took ballet lessons as a child and planned to become a classical ballerina, then broke her foot at age 14 during a rehearsal, and her hopes of a dancing career ended.
*She made her television acting debut in 1987 in Guiding Light as Dinah Marler.
*From 2001 to 2003 she starred in the CBS drama series The Agency as graphic artist Terri Lowell.
*She starred as Abigail Griffin in the post-apocalyptic drama series, The 100, from 2014 to 2019.
*Follow her on Twitter.