Paolo Lorenzi is an Italian professional tennis player who achieved a career-high singles ranking of World No. 33 on May 15, 2017. Turning professional in 2003, Lorenzi earned his first ATP Tour title after beating Nikoloz Basilashvili at the Generali Open Kitzbühel, at age 34, on 24 July 2016. He recorded the best grand slam singles performance of his career, reaching the round of 16 at the 2017 US Open. 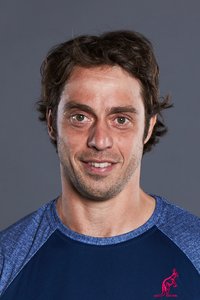 Paolo Lorenzi Facts:
*He was born on December 15, 1981 in Rome, Italy.
*He turned professional in 2003.
*He reached his first ATP World Tour final at the age of 32, in São Paulo.
*He is coached by Claudio Galoppini.
*Follow him on Instagram.