Patrick Franziska is a German table tennis player who plays with FC Saarbrücken-TT in the German Bundesliga, and is a member of the German national team. He is currently sponsored by Butterfly. Franziska became the European champion in doubles in 2016, and won bronze at the World Championship and gold at the European Games in mixed doubles in 2019. 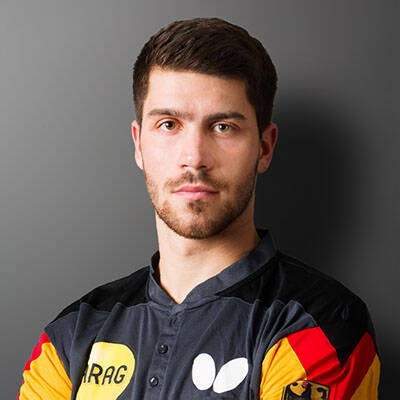 Patrick Franziska Facts:
*He was born on June 11, 1992 in Bensheim, Germany.
*He began his career at TSV 1875 Höchst.
*He was a multiple German junior champion.
*He won three bronze medals at the 2018 European Championship.
*He is currently sponsored by Butterfly.
*Equipment(s): Butterfly Apolonia ZLC blade; Butterfly Tenergy 05 (Red, FH); Butterfly Dignics 05 (Black, BH)
*Visit his official website: www.patrick-franziska.de
*Follow him on Instagram.