Patrick Kafka is an Austrian-American male model. He has appeared on the cover of fashion magazines such as Flaunt, the Italian edition of L’Officiel Hommes, the Japanese edition of GQ, the Spanish version of Esquire and the German edition of Playboy. He has worked with such fashion photographers as Sam Bassett, Arnaldo Anaya-Lucca, Inez van Lamsweerde and Vinoodh Matadin, Jem Mitchell, Sergi Pons, David Slijper and Milan Vukmirovic. Born in 1989, in Vienna, Austria, he was signed to Q Management New York City and Stella Models at age 15. In June 2009, he had his début at Milan Fashion Week in fashion shows for Dolce & Gabbana, Dsquared2, Bottega Veneta, Jil Sander, Zegna und Moschino, as well as in Paris for John Galliano, Hugo Boss, Kenzo and Thierry Mugler. 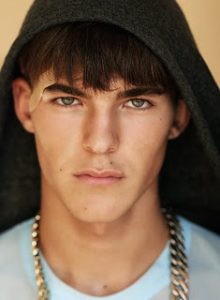 Patrick Kafka Facts:
*He was born in 1989, in Vienna, Austria.
*His first job was a campaign for Abercrombie & Fitch in 2009.
*He was invited by Richard Chai and Michael Bastian to their runway shows in New York in September 2009.
*He became the face of Trussardi in 2009.
*Follow him on Twitter and Instagram.