Franziska Knuppe is a German model and actress who has appeared in campaigns for many important fashion houses such as Triumph International, JOOP!, Oasis and Reebok. She has modeled for Thierry Mugler, Diane von Fürstenberg, Escada, Rocobarocco, Betty Jackson, Strenesse, Wunderkind Couture, Jasper Conran, Vivienne Westwood and Issey Miyake. She has appeared on the cover of fashion magazines such as GQ Germany, Madame, Elle, Vogue, Petra, Cosmopolitan, Marie Claire and Brigitte. She has worked with such leading photographers as Peter Lindbergh, Manfred Baumann, Karl Lagerfeld, Michel Comte, and Arthur Elgort. Born on December 7, 1974, in Rostock, Germany, Knuppe grew up with a brother in Potsdam. Following her graduation, she moved to Munich in 1993 and until 1996 trained as a hotel manager at the Hotel Park Hilton. She was discovered in 1997 at a café in Potsdam by designer Wolfgang Joop. She has been married to Christian Möstl since 1999. Together they have one daughter, Mathilda Ruby Möstl. 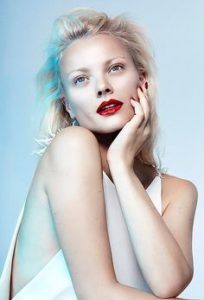 Franziska Knuppe Facts:
*She was born on December 7, 1974, in Rostock, Germany.
*Her mother agency is Model Management in Hamburg.
*She trained as a hotel manager at the Hotel Park Hilton.
*She has been the brand ambassador of Mercedes Benz since 2014.
*Visit her official website: www.knuppe.de
*Follow her on Twitter, Facebook and Instagram.