Mia Goth is an English actress and model. She is best known for her role as Sophie Campbell in the series The Tunnel and her appearances in the films A Cure for Wellness, The Survivalist and Nymphomaniac. For her work in The Survivalist, she won a British Independent Film Award in the category of Most Promising Newcomer in 2015. Born Mia Gypsy Mello Da Silva Goth on November 30, 1993 in Southwark, London, England, to a Brazillian-born mother and a Canadian-born father, she spent her growing years in Brazil, Canada and England. She began her modeling career at the age of 13 after being discovered by Storm Model Management. In March 2016, she became engaged to her longtime boyfriend Shia LaBeouf. 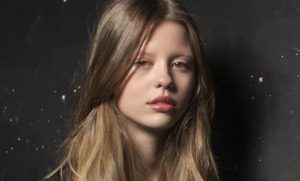 Mia Goth Facts:
*Born in London, England, her family lived in Brazil until Mia was 12-years-old and then moved back to the UK to settle in Lewisham, London.
*She began her career as a model.
*She was discovered by Storm Model Management when she was 13 years old.
*She appeared in Vogue and was the face of Mui Mui.
*Her maternal grandparents are American-born artist, musician, and photographer Lee Jaffe, and Brazilian actress Maria Gladys.