Award-winning American celebrity chef and cooking show television host who has published fifteen cookbooks. She owns and operates The “Lady and Sons” restaurant in downtown Savannah with her two sons, Bobby Deen and Jamie Deen. Born Paula Ann Hiers on January 19, 1947 in Albany, Georgia, she was raised Baptist, and is still deeply devoted to her faith. Her parents are Corrie A. Hiers and Earl Wayne Hiers, Sr. 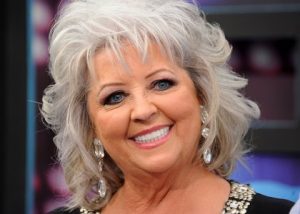 Paula Deen Facts:
*She is famous for her cooking shows on the Food Network.
*Forbes Magazine estimated her earnings for the year to be $4 million in 2007.
*She was named “TV’s Sexiest Female Chef” by Maxim magazine on October 11, 2011.
*She uses the last name Deen, from her first marriage (Jimmy Deen).
*Visit her official websites: www.pauladeen.com and www.pauladeenstore.com
*Follow her on Twitter, Facebook, Google+ and YouTube.