Jyothika Saravanan is an Indian film actress, active primarily in Tamil films. She also appeared in some Kannada, Malayalam, Telugu and Hindi films. She made her acting debut in the Bollywood film Priyadarshan’s Doli Saja Ke Rakhna which was released in 1998. She acted in many successful films such as Kushi, Dhool, Perazhagan, Chandramukhi, June R, Thenali, Thirumalai, Dumm Dumm Dumm, Snegithiye, Kaaka Kaaka, Pachaikili Muthucharam, Mozhi and 36 Vayadhinile. Jyothika was born to Chander Sadanah and Seema Sadanah on October 18, 1978 in Bombay, India as Jyotika Sadana. She was educated at Learner’s Academy and Mithibai College. She has been married to Suriya since 2006. They have two children: son, Dev, and daughter, Diya. 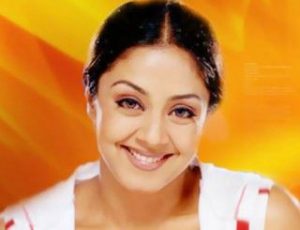 Jyothika Saravanan Education:
She did her schooling from Learner’s Academy, Mumbai.
She majored in Psychology at the Mithibai College in Mumbai.

Jyothika Saravanan Facts:
*She is the daughter of film producer Chander Sadanah.
*Her first Bollywood film was Priyadarshan’s Doli Saja Ke Rakhna in 1998.
*For her performance in Vaali, she won Filmfare Award for Best Female Debut – South, and Dinakaran Best Female Debut.
*Follow her on Twitter.