Paulina Goto is a Mexican actress, singer, and television hostess who first achieved fame for her debut role as Andrea Paz in the Mexican telenovela Niña de mi Corazón in 2010. She has also starred in Miss XV, Mi corazón es tuyo, Un camino hacia el destino, El vuelo de la Victoria and Daughter From Another Mother. From 2011 to 2014, Goto was a member of the popular Mexican-Argentine pop group, Eme 15, formed by Televisa producer Pedro Damián. Her self titled debut album, released in 2010, reached number 43 on the Mexican music charts. 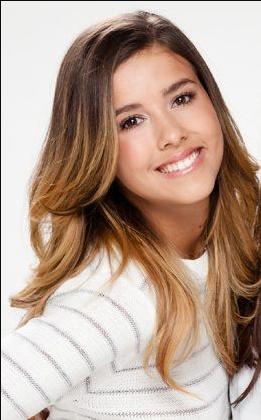 Paulina Goto Facts:
*She was born on July 29, 1991 in Monterrey, Mexico, to parents Alicia Torres and Eduardo Gómez.
*As a child, she participated in dance classes and began taking ballet lessons when she was four years old
*She trained as a rhythmic gymnast from age 5 to age 14, and competed in rhythmic gymnastics at her first national junior Olympics tournament in Guadalajara, Mexico in 2000.
*She began her television career in 2008 as a co-host on the youth-targeted television news show, Roomies.
*She made her acting debut in the Mexican telenovela Niña de mi Corazón (2010).
*She was nominated for Favorite Actress at the 2020 Kids’ Choice Awards México.
*She was in a relationship with Argentine actor, Horacio Pancheri from 2016 to 2018.
*She began dating Rodrigo Saval Pasquel in 2019.
*She speaks English and Spanish fluently.
*Visit her official website: www.paulinagoto.com.mx
*Follow her on Twitter, Facebook and Instagram.