Actress and model who has starred in such films as The Cider House Rules, The Girl Is in Trouble, 30 Beats, Enter the Void, A Walk to Remember, Choke, and Nurse 3D. She is also known for her role as Lucy Danziger in the American period crime drama television series Boardwalk Empire. She worked as a runway model before she took up acting. She had her acting debut in 1998 with a small role in the romantic comedy The Object of My Affection. Born María de la Paz Elizabeth Sofía in New York City, New York, she is the daughter of Judith Bruce and Iñigo de la Huerta y Ozores. She has an older sister, Rafaela. 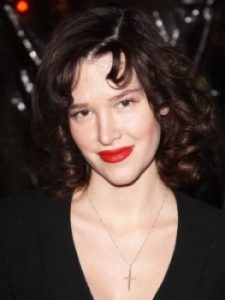 Paz de la Huerta Facts:
*She was born to a Spanish-born father and a Minneapolis, Minnesota-born mother.
*She was featured on the cover of the New York Times Sunday Magazine in October of 2003.
*She attended Saint Ann’s School with fashion designer Zac Posen.
*Her name (Paz de la Huerta) means ‘Peace of the Orchard’ in Spanish.
*Currently, she resides in New York City with her parents.